The History of Insulation

By Josh LewisJanuary 10, 2022No Comments

Insulation hasn’t always been fiberglass, cellulose or spray foam! In fact, records of insulation date back to the BC years. Read more below to learn about the evolution of insulating materials! 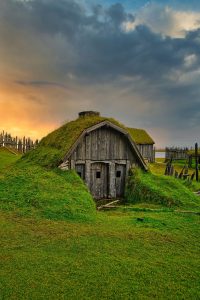 Home enclosed in mud and grass.

Egyptians and Vikings used mud when building their homes due to its cooling abilities.

Ancient Greeks were the first to use asbestos. Asbestos was believed to be mystical because it didn’t catch fire.

The practice of keeping water warm was possible by wrapping pipes in cork.

Tapestries were hung on the walls and in doorways to prevent them from being drafty.

Steam-powered manufacturing plants would move steam around using pipes. These pipes were very hot and were a danger to workers. Asbestos was wrapped around the pipes to keep workers safe. It was also used in the auto industry in the early 1900s. This was prior to the discovery of the harmful effects of asbestos.

Scientist Dale Kleist accidentally thin glass fibers while trying to vacuum-seal two glass blocks together, which became the foundation of fiberglass insulation — which was made popular in the 40s.

Cellulose had been one the earliest forms of insulation, but was quite unpopular due to its flammable qualities. In the 50s, insulation manufacturers started adding fire retardant to cellulose. Popularity of the insulation grew into the 70s, partially due to the discovery of the harmful effects of asbestos, leading to changes in insulation types used.

Spray foam was first created by the military in the 40s, but didn’t start being used often in homes until the 80s.

Development of spray has continued since its creation. It is now created in two forms: low density or open cell, and medium density or closed cell.

The Insulation Company is conveniently located in Oldsmar, FL, offering quick access to neighboring counties, such as Pinellas and Pasco, as well as the Gulf beaches outlining Tampa Bay. Here at The Insulation Company, we strive to be the best and provide quality work at all times! Our friendly estimators are standing by. Call today to get a personalized estimate for fiberglass or cellulose insulation! You can reach us at (727) 457-1642, or by clicking here.

© 2022 The Insulation Company. All Rights Reserved. Powered By: Assorted Design